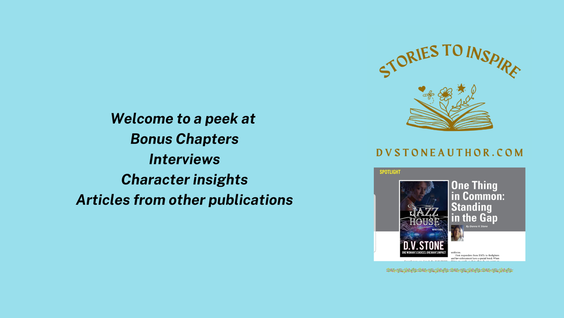 See the giveaway details at Goodreads.

Enter Giveaway
Newsletter Sign up for 1st Peeks
This article appeared earlier this year in Blue Magazine www.thebluemagazine.com/
One Thing in Common: Standing in the Gap SPOTLIGHT
By Donna V. Stone
Several years ago, I took the NaNoWriMo challenge. November is National Novel Writing Month. Thirty days, 50,000 words. Long story short, I accomplished the task only because of writing what I knew. What did I know? For 40 years, I’ve been surrounded by blue uniforms, OK, sometimes black. Some with stripes, some without. Some have helmets, some don’t. But all have one thing in common. They willingly give of themselves 24 hours a day, 365 days a year. Leave the family gatherings on holidays. Snow, ice, temperatures either too hot or too cold. They protect, rescue, and often pick up the pieces of someone’s life.
It was early in the 1980s when I began my First Responder life as a professional and volunteer Emergency Medical Technician. One of my strongest memories is responding to a call in my coverage area. My partner and I were the only all-female crew at the time. The tones went off, and so did we. A short while later, a simple unconscious male became a potentially violent situation. The man woke, and people from all the housing around us came out and egged him on in striking out at us. My partner got rolled by him, but I was able to radio for help. Let me tell you, I was never so happy to see red lights and blue uniforms. First responders from EMTs to firefighters and law enforcement have a special bond. When things go south, as they often do, we count on each other to protect, minister to each other, and save each other from tricky situations.
One of my long-term positions was as an EMT in an NJ State Prison. In 1994, I married a correction officer and volunteer firefighter. Now we’re both retired. My first book, “Rock House Grill,” was the 50,000-word novel I alluded to above. It’s considered romantic suspense and has, you guessed it, EMTs, paramedics and police. The second book, now under contract, is titled “Jazz House.” Police Officer Michael Machau is the main character. Michael is a composite of so many officers in my life. He’s honorable, compassionate and kind. He loves friends and family. He goes above and beyond to help his community.
In today’s climate, so many believe the opposite. One evening, in a chat with other authors, another writer stated she was researching in a county jail. She said she was more afraid of the cops than the inmates. I called her out on it. But if we don’t as a society hold people accountable for their reckless vernacular, they can influence others. You know, not every cop is great. Neither is any EMT, firefighter, or citizen. The fractions of a percent who aren’t, unfortunately, are the ones we hear about. That’s what makes the news, news. Because the other ninety-nine percent are a Michael Machau. Honorable, compassionate, and kind. Shh, I’m going to tell a secret. I know you. Most of you anyway. You love, care, and run to danger every day despite the ugliness of the world. You make a difference even when others don’t or refuse to see it. Through my writing, sorry but I’m going to out you, tell the world you all are big teddy bears. Many are grizzlies on the outside, but inside, where it counts? Koala bears.
Though I no longer respond to calls (I gave it up quite a few years ago), the blue uniform continues to be a constant in my life. My son is now a correction officer as well. Many of our friends still suit up every day. Hubby is a Life Member of the fire department and, until last year, still taught fire prevention in the local schools.
Me? I tell stories about superheroes. Ones who don’t wear capes but uniforms. Who don’t leap tall buildings but rush into those buildings. Who when others are running from danger, run to it. Thank you for standing in the gap. Protecting, serving, consoling, and keeping the rest of us from harm. This book is dedicated to First Responder in all forms. The people who give up their time and often their well-being to protect and serve. And especially to Lieutenant M. Monaco of the Newton NJ Police Department. I hope I did justice to you all with my character Officer Michael Machau of the fictional Slate Quarry Police Department. To my friend Getty. Each day when leaving work, we would all get a Getty hug and be admonished to “make good choices.” You are an inspiration. To El Felder, my editor, breathing coach, and cheerleader. To my beta readers, Paula L., Noemi D., and Amber Daulton, I couldn’t have done this without you. To Pete, my dearly beloved and biggest supporter, TWF. And finally, to my Lord and Savior, Jesus Christ.
*addendum* Jazz House is now published. 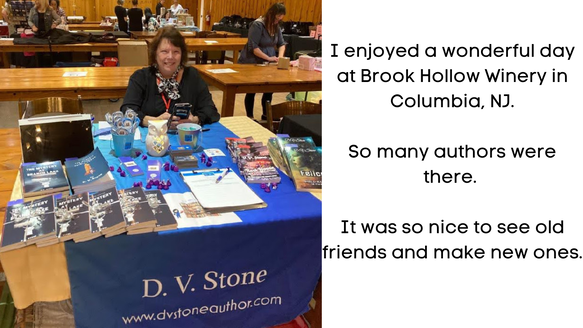 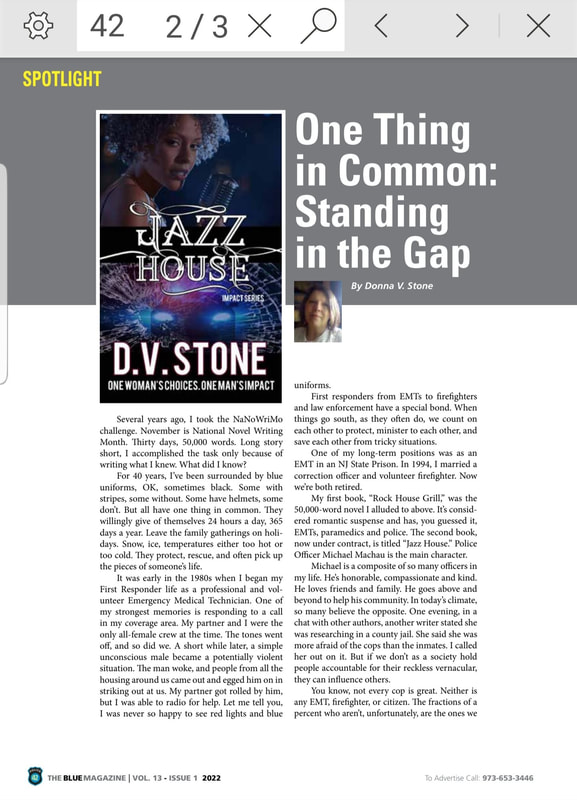 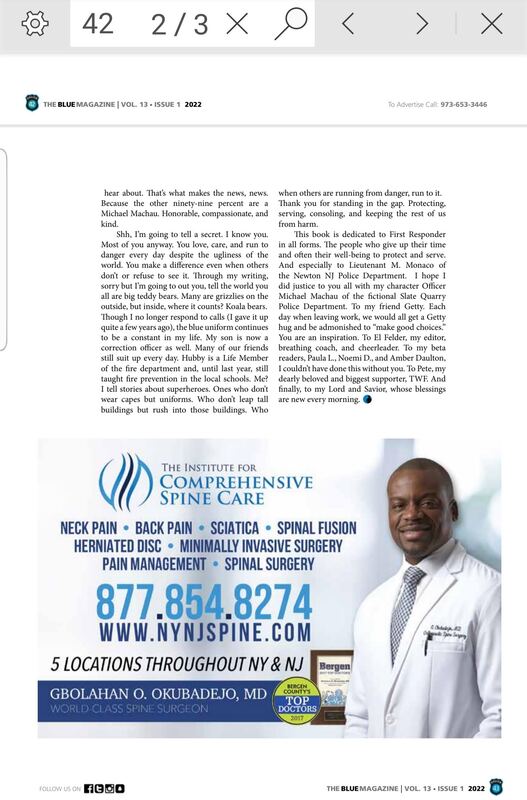 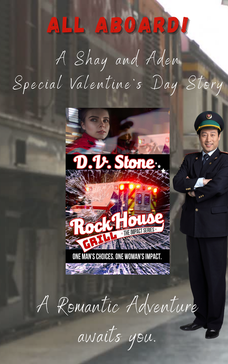 I hope you enjoyed this story. But this is not over yet. In a few weeks , if you signup for my Newsletter https://mailchi.mp/1172dfb299fb/d-v-stones-around-the-fire an announcement will be forth coming.
Each month will be a different event building up to the big day. Don't miss the ongoing treat of following Shay and Aden through the summer. Olivia of course will be the Maid of Honor, but Shay will need a few brides maid. Have you ever wanted to help pick out a wedding dress? That's in the works as well. So make sure you are on the guest list.
​
And if you missed any of the other bonus features keep on reading below.
Hi!  Welcome to the Bonus room. Since Rock House Grill's release day party was postponed until today in conjunctions with Rainbow Sprinkles, we're going to play a game with the "Play List". Even if you haven't read Rock House, I think if you listen to or read the clues you may still guess at least some of them.  Even though the past couple of months threw some stumbling blocks in Aden’s path, for the most part, he’d managed to stay above it and still believe in his dreams. By the end of the evening, Olivia felt something she hadn’t in a very long time. Possibilities. They would ride out this landslide and figure out the changes. The alarm went off, and for the first time in a long time, Shay didn’t silence it right away. The bluesy voice on the radio sang about feeling good, and so did she. The catchy 70’s pop tune with an upbeat sound filled the air with lyrics about taking a chance on someone. Walking out to her car, she surprised herself as she hummed the upbeat song from earlier and reflected on the words. Even though the future wasn’t clear, hope flittered on the horizon. She hit the button on the radio and tried to drown out the voice in her head. A female rocker wailed about a broken relationship. Aden sat on the therapy table. The next upbeat track on the playlist encouraged people to walk. “Nice choice of music, by the way. Speaking of walking, I need to get rid of these crutches ASAP.”On page 220, Eli and Margaret show the rest of the staff they’ve still got it.
The entire staff sang and swayed as the silly song about limes and coconuts piped through the kitchen speakers. Shay giggled, and then sipped from her glass. An old song ran through her head. This was a wonderful world, and she still had a date that night. He glanced over, and the door leading upstairs opened. Shay walked through. Van sang it right. Shay was a first-degree angel. The voice crooning through the speakers sang about the pleasures of being a simple man. How Great Thou Art with Pentatonix and Jennifer Hudson
I hope you enjoyed our game today!
Newsletter