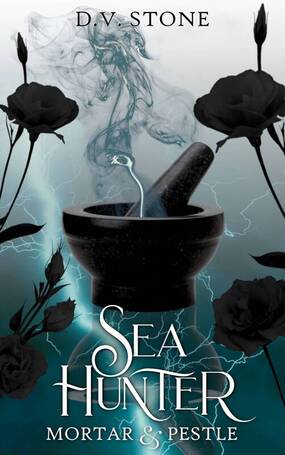 On the turbulent high seas, an archeologist must protect a historic shipwreck from treasure hunters—not fall for one.
​
Zahra Corbyn
As the professor of antiquities, nothing snaps my cap more than treasure hunters and looters. They smash and grab and then are gone with the wind. And there are two after Sea Wraith. But fate is a funny thing. Thanks to an ancient Mortar & Pestle, not only am I in cahoots with one of them but he’s also fired up my heart, turning me into a khaki-wacky.
Captain Jack Alexander
I’ve been told women on a ship are unlucky, but this dame has the two pieces of the map I need to finally claim Sea Wraith. Now, I find myself in a lousy deal that makes me one-third partner with her and a known scalawag. It’s either that or bupkis. After all these years of chasing down my dream of finding the shipwreck, my obsession is cooling off and heating up toward a bird who’s way above my pay grade.
Can the two unlikely allies work together while safeguarding their hearts against the power of the Mortar & Pestle?
If you like Lara Croft and Indiana Jones, you’ll love Zahra Corbyn and Jack Alexander.
Shield-Mates Of Dar a Fantasy Romance Series ​ 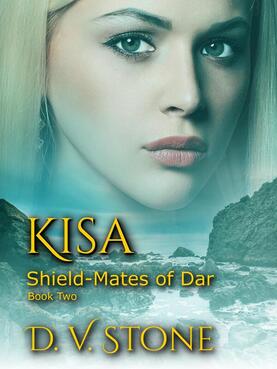 Kisa
Shield-Mates of Dar
Book Two
December 1, 2022
​
In a war between humans and shifters, sparks and fur fly…Until scales appear.

Princess Kisa, the middle daughter in the shifter nation of Dar, is often overlooked and underestimated. Always the devoted caregiver of family and country, she’s come to terms with her future as a Shield-Mate in a political marriage. Many, including Kisa, are surprised when her father names her as heir to his throne.
Kalman, once a privileged son of the former protectorate Sorota, is an outcast and man without a future. The people of Ruinae consider him a weak, self-indulgent man. Only his trusted servant knows the heart of the soldier beneath the veneer.
Forces are gathering against the two countries, and now dragons, long banished to the outland, have returned. Kisa and Kalman are charged by King Dar to find out how entrenched the dragons are with the enemy. Since a long-ago meeting, Kalman never forgot the spitfire Lynx-shifter. He’s no longer the boy she’d met, but a man. One determined to have her despite their differences. But Kisa can’t fall in love with the enemy. Can she? Would her people accept not only the son of Sorota but one whose family seeks retribution?
Bookbub ⭐️⭐️⭐️⭐️⭐️ Review
Such an excellent read! Great world-building and the characters were wonderful. I love the angst and banter between the hero and heroine. The heroine is kick ass and tough with a good heart. The hero is sexy and strong. The paranormal aspects, the magic and the shifters, were compelling and perfectly written. I would love to read more in this series!
Grab your copy of Kisa today! 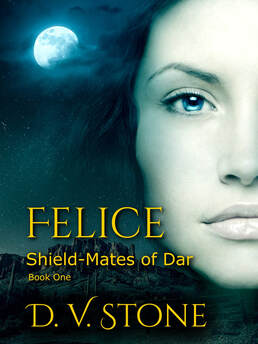 Be swept into an epic fantasy romance packed with adventure, treachery, and magic.
Felice
Never show weakness. Never give away control. Never let anyone into your heart. These are the words I live by. After what they did to me—and what I did to them, my father came near to putting me down. A feral panther-shifter couldn’t be allowed to live. The extreme measures I took to regain control left different kinds of scars. Now here I am back in the human world. Not much has changed. Once again, while on a mission of diplomacy, I’m nearly killed. Only this time, it’s the man who was to be betrothed to my sister who’s saved my life. But in return, he’ll take my hard, fought for control.
Ayer
I’m a prince who only wants to be a soldier. But here I am, failing my duty once more. On my watch, the Darrian emissary, who also turns out to be Princess Felice, lies dying from an arrow. If we don’t save her, our countries will be at war. She’s fighting us. Says she can’t control her shift if we cauterize the wound. I know what needs to be done. It’s not supposed to be her, but her sister. Will she give me the Shield?
An enchanting tale of romance between two who were never meant to be together in a thrilling world of magic, war, treachery, and the sometimes-winding path love will take.

Amazon Review 5-Stars
What’s not to love?
Shifters, humans, war, intrigue combined with engaging characters in a fantasy land tied together in a love story. This is a fun and easy read surprising me that it has a deeper under plot. Though this book deals with some serious issues there were times I couldn’t help but laugh out loud.
Grab a copy of Felice today.
Impact Series Contemporary Romantic Suspense 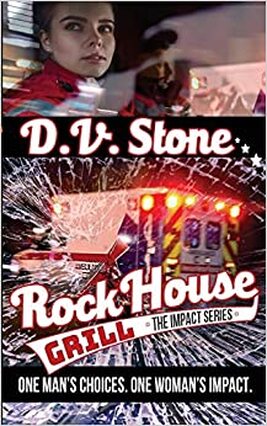 ​Aden House, successful but driven chef and TV personality, refuses to slow down. His life implodes one night, damaging him both physically and emotionally. He's rescued by a woman he thinks of as his angel. Shay McDowell has rebuilt her life after her divorce. She juggles volunteer EMT duties and her job, while dreaming of becoming a chef. She finds her way to Rock House Grill and back into the life of the man she helped save. Can love be the ingredient needed to survive the many obstacles they face?
Also Available as an Audiobook.

Mystery and Romance with a Dash of Rock!
Reviewed in the United States 🇺🇸 on September 27, 2021 Verified Purchase
The fast paced worlds of emergency medicine and the restaurant business provide a rich and exciting backdrop for DV Stone's quick-paced, heart-stopping, and super-satisfying story. The book follows a really interesting cast of fun and diverse characters as they work through complicated pasts to find love and career fulfillment. The musical references are a hoot; the mystery keeps you guessing; and the food descriptions will keep your mouth watering until the delivery guy arrives. Terrific blend of steamy but sweet romance and cozy mystery. Highly recommend!
Get your copy of Rock House Grill today. 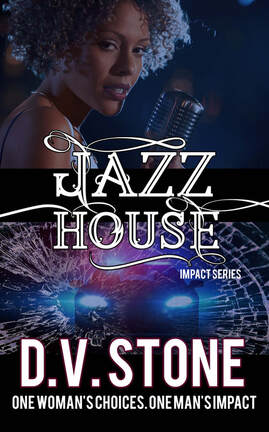 Jazz House
by
D. V. Stone
​One woman's choices. One man's impact.
​​Jordan Vasilakis is on the run, living under an assumed name. After a disastrous marriage to a notorious Greek business tycoon, she flees to the States and starts rebuilding her life. But her ruthless husband is determined to destroy her…once he finds her.
Michael Machau is drawn to the new singer at Jazz House restaurant, but the guarded woman is harboring dangerous secrets. The dedicated police officer may have to risk more than just his heart to forge a connection with the woman he knows as Madeline Cielo, especially when he discovers she’s living a lie.
Worlds collide. Lies entangle. Survival, much less love, is in question. They must quickly distinguish friends from enemies or risk losing everything—including a future together.
​
I was touched by this note from a reader...
I just finished reading jazz house. It was well done! I was surprised by the little twist in Olivia, Aden, and Michael's family. That was a nice touch, it brought your story to the importance of family and not the expected boy meets girl, get married, end of story. What happens to Tito? Zach? And Molly? Next book? I also like how you used grandma's quotes to share the word of God but in a graceful way, not preached or stuffed down. It was well included in your story. Well done!! Thank you for sharing your gifts and writing so well. ~JB

Advanced Reader Copy review.
D.V. Stone has written a riveting story of one courageous woman finding the strength to stand up for herself and the obligation to protect others she has come to care deeply for, and the resourcefulness to overcome the many roadblocks that life and her poor decisions have thrown in front of her. Stone’s believable yet flawed characters drive the plot. The characters evoke strong emotions in readers right from page one. This reader found herself wanting to hug Jordan on one page and throttle her on the next.
Get Jazz House today.
A Lake Unami Stories. Sophia's Magic Beans coming in Spring 2023
Goodreads Want to Read 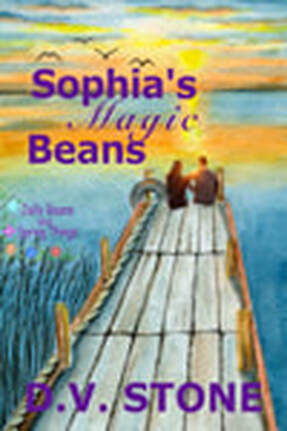 Calliope Novak’s candy store made it through the shutdowns, but she still struggles with everyday costs. She juggles chores, work, and making time for Sophia—her six-year-old. Personal life? Non-existent.
Luke O’Brian confronts his boss and mentor after discovering his law firm’s involvement with a crooked politician and is reminded of the non-disclosure agreement he’d signed. He can’t break it without evidence—evidence that he can’t access after he’s escorted out of the building by security. Devastated, he reluctantly returns to his hometown to regroup.
Lake Unami in Northern New Jersey is a magical place. Rainbows and unexplained coincidences seem more normal than not. Guardian angels, bookstore owners, and an endearing cast of characters all come together to bring happiness and love to Calliope, Sophia, and Luke.
Get your copy of Rainbow Sprinkles 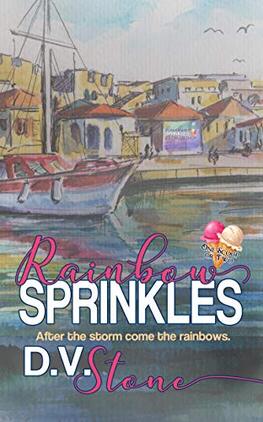 Retired and widowed Gloriana Jones is forging on with the plans she and her late husband dreamed of—bringing joy and happiness, one ice cream cone at a time, to Lake Unami. But bad weather is drowning her dream. A trip to Upstate NY is bittersweet for Nathan James. He is excited to see his first granddaughter but without his wife he's lonely. When his car breaks down, he heads to the only light he can see, an ice cream shop. With aid from a heavenly source, electricity sparks, but will the two weather the summer storms and find love a second time? Or will their hopes and dreams melt away?

Goodreads Review 5-Stars
Rainbow Sprinkles: I loved the title! It was a great second chance at love. I loved how Nathan and Gloriana met and how the sparks happened. I loved how rain, rainbows, and ice cream brought them together. Great writing, dialog, and storytelling.
Fun for the whole family!
Amazon and Kindle Unlimited
Amazon and Kindle Unlimited
Amazon Review
​The Mystery of High Pointe Tower is such a fun paranormal adventure. While it’s aimed at middle-grade readers, it’s suitable for YA and even adult readers, too. The characters and the witty banter move the plot as does the mystery. D.V. Stone has a talent for paranormal adventure stories and I thoroughly enjoyed it. The plot twists are a little predictable but will be appealing to middle-grade readers. Sam is a very relatable character to kids. This wholesome story is the perfect length with a pleasant ending. There’s room for a lot more adventures for Agent Sam Carter and friends and I, for one, can’t wait to read more. Highly recommend!
Get a copy of Australia Burns today.

​A collection of Short Stories in  Mainstream Fiction, Women’s Fiction, Thrillers, and Mystery.
​Australia Burns
by Various Authors
Stories in this collection are contributed by authors who care about Australia and the relief efforts from the devastating bushfires. All profits from the book will be donated to charities involved with the recovery efforts. The publisher and authors are not affiliated with the charities. They simply want to show Australia their love and support.